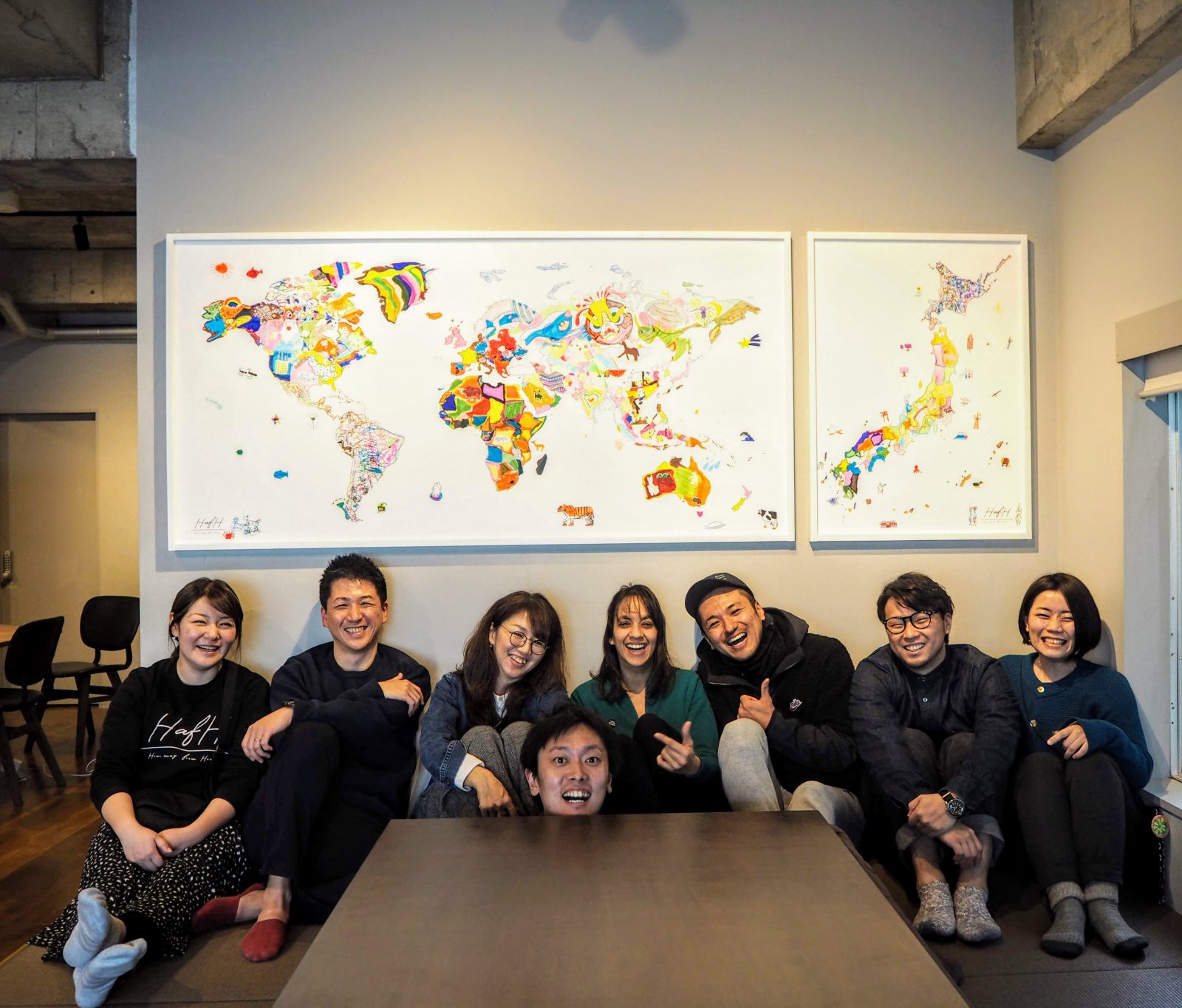 We at HafH continue to explore ways to make a positive social impact to the local community in Nagasaki through the Diversity in Residence Project. HafH created the project in order to move in the right direction towards meeting SDG targets, and through the project we have opened up to different kinds of diversity.

Vol. 1
The Birth of Diversity from Identity

Vol. 3
Why MMA Fighter Shinya Aoki gave up his house

The theme for this project centered around people with disabilities, children and art. On February 15 and 16 this year (2020), we invited Japan-born and British national designer Laila Cassim to hold a workshop at the Nagasaki Prefectural Art Museum’s Canal-side Gallery. The workshop held was about creating a one-of-a-kind world map.

AIUEO LAB, that provides support for disabled people in Nagasaki Prefecture, Tsunagu Artworks, that turns disabled people’s artwork in products, and HafH, the coliving/coworking space network that aims to create the infrastructure for a society accepting of diversity and diverse values, got together to create a collab between children with disabilities and local designers.

We decided that we wanted to set up a world map on the 3rd floor of our first flagship facility HafH Nagasaki SAI.

Visitors staying at SAI could put a pin in the map to show where they are from, which we hoped would start conversations between other travelers like, “Where did you come from?” and “Where will you travel to next?” At this point, we decided that we didn’t just want any old map, we wanted to create something great; something that would inspire conversation.

During the two day workshop, Laila, who herself has a disability, said that in both creativity and everyday life, the words “feel free to do what you like” are the greatest freedom these kids can know, but it’s not the essential freedom they have right now.

In order for these kids to get a taste of this freedom, it surrounding support was particularly necessary, plus care in providing a new place and in creating the right atmosphere. While opportunities like being surrounded by nature deep in the mountains, or going to everyday art museums are few, by being freed form the constraints of their everyday environment, their creative energy just explodes. Laila explained that she “hopes to help these kids release their emotions.”

Words from the artists’ parents and guardians also had a lasting impression. Usually, the kids are not given any limits and told things like “don’t worry about staying in the lines,” “let’s draw really big,” etc. This time, they were told they need to stay within the continental and country borders, which had many of the guardians and supporters worrying “Is this really going to turn out ok?” and “I wonder if it’s going to look like a world map at the end.” Despite those concerns, the handmade project was a huge success and the final creation really touched many people!
I’m sure that it will be a symbol of HafH Nagasaki SAI from here on out.

Adults too became completely involved in what they were doing, forgetting time. It was a really great feeling, working together with everyone to create one project.

There was never any push to “use it just because disabled children drew it!” Being on the same playing field, and as one of the expressionists herself, Laila was very professional in her conduct during the project, firmly guiding the children to create something that matches with HafH’s image.

Thanks to the combined efforts of everyone, including local designer CHEBLO, we were able to finish the project despite the tight schedule. We’d like to offer our sincere gratittude to all those who helped with the project, including the Airinkai, and Tsunagu Artworks.

I was surprised and moved by the energy that these local Nagasaki kids had in making their creation, that matched or even topped that of non-disabled people. This workshop forced me to think again on my understanding of diversity. Thank you to Sadamatsu, Ishimaru and Sakai from AIUEO LAB. and of course, to Laila, for making me more aware of so many things.

news every. ~世界に一つだけの世界地図~ (link in Japanese Language Only)

News Every on NIB (channel on Nagasaki TV) did a story on the workshop which aired at 18:15 on February 18. During the story, KabuK Style Co-CEO Ryo Osera noticed that “on a world map created by children, country borders have no meaning.” This adult concept of the world is irrelevant to those who created this map, and so it allows those looking at it to feel a sense of world peace.

Thank you for reading until the end. Please keep an eye out for more of HafH’s SDG related projects.

A British national born in Japan and raised all around the world. Being multiracial, a disabled person, among other things, Laila calls herself a “one-person United Nations.” As a designer, Laila combines her skill with her expertise in social welfare, and conducts product development and planning and management of design programs and workshops to promote social participation and economic independence of artists with disabilities in Japan and overseas.
Laila has been involved in Project ROCKET (Room Of Children with Kokorozashi and Extra-ordinary Talents) at the University of Tokyo’s Research Center for Advanced Science and Technology, and has been a project designer for TURN since April 2019.

“Always I Understand Each Other”
A company that will create a foundation for various human resources to make us of through communication based on the concept of “a world that learns, feels, and nurtures through dialogue.”
During Japan’s National Isolation Period, Nagasaki was the only place in Japan open to the outside world, taking on and learning from the diversity of other countries which gave rise to the “WaKaRan” (lit. Japanese, Chinese, Dutch) mixed culture of Nagasaki. For this very reason, Nagasaki is the perfect place for thought and human resource development.
Regardless of environment, industry, or field, we aim to create a kind and welcoming community through communication of thoughts and feelings between people, and through repeated dialogue. We will design a strategy to make our vision a reality, and to foster human resources who can spread our modern WaKaRan culture from Nagasaki to the world.

A place where anyone, with or without disabilities, can freely create. Coordinating knowledge, skills, experience, personal connections, and management resources brought by individuals and companies in each field, Tsunagu Artworks endeavours to create a workplace and environment where people with disabilities can actively participate.